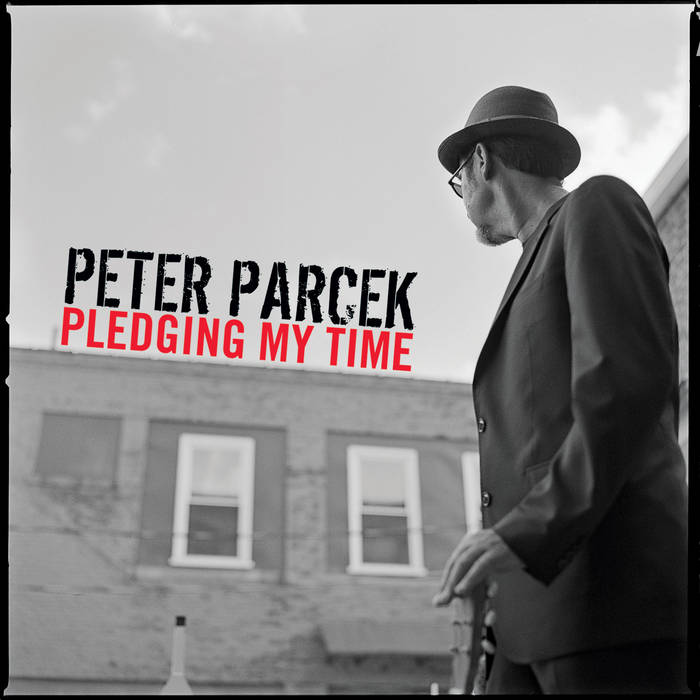 I can remember walking up to the building to get in line to go in. The thumping drums and the rumbling bass, muffled by the thick brick exterior, would echo from the inside. It sounded like a heartbeat does when you put your ear up to someone’s chest: faint, but steady. As soon as the door opened -wham!- Peter’s opening guitar riffs hit like a rush of blood to the head; pure energy.

Peter was the one guitar player that never failed to give me that pure energy feeling. When Peter was in the house it was always an event; everyone wanted to be part of a live Peter Parcek experience.

A live Peter Parcek experience is second to none; it leaves the floor littered with jaws. Having logged many live gigs, I was also very interested in hearing recorded music from Peter. I was always asking Peter if he was going to release an album. Each time I asked, “I’m not ready, yet” was Peter’s reply.

I never knew what he meant by that until recently.

In 2010 Peter released his national album debut, The Mathematics of Love, to much critical acclaim. The album was a high career achievement. I asked Peter how he felt about this. “I was finally ready to make that album,” he said, “I had found my voice on my instrument and in my singing. I was ready to make a valid statement as an artist.”

Ready he was. The release earned him “best” nominations from his hometown Boston Music Awards as well as the nationally recognised Blues Music Awards.

It says a lot about the integrity of a musician - one that is already playing at a level most never reach - that after four-plus decades of live gigs and honing his self-taught style, he finally felt he was “ready” to make his statement. It appears that, with this EP release, Peter is ready to make another statement.

Peter is most often thought of as a blues artist. There is no doubt that Peter can play the blues, but the full spectrum of his guitar stylings is infinite. Peter has a unique ability in that he is able to juxtapose style, genre and technique to create an original sound; a personal statement.

Pledging My Time, a collection of Bob Dylan songs as interpreted by Peter, is a bona fide statement. Not being a musician myself, I would think it would be daunting to take on another artist’s songs - let alone Bob Dylan’s- and attempt to create an original sound with them. On this EP, I think you will agree, Peter has done just that.

The true measure of an artist’s originality may be found in how they interpret another artist’s songs and create something different and unique that challenges the listener.

After one listen it is obvious that Peter, with great effect, has used these songs to stretch his boundaries as an artist and create something different. The music, while not completely abandoning his blues roots, explores new terrain: it is more ambient and spatial and uses more acoustic guitar than ever before.

Each song on this EP is interpreted as if Peter is painting a picture that flows into one another: a “series of dreams”, if you will. Peter’s signature lyrical and melodic guitar style, shapes each picture and supports Bob’s poetic lyrics.

Speaking of lyrics, the star of this collection is Peter’s voice: it stands out as possibly the EP’s best instrument. It is equal parts confidence and finesse. Peter uses keen vocal affects throughout that add texture and poignancy to otherwise familiar stories.

These familiar stories were written by Bob Dylan. Since the day he offered them up, other artists have been interpreting them. Bob Dylan is an artistic chameleon; a shape shifter. Throughout all of the twists and turns in his body of work and range of persona, there is one characteristic that perpetuates his legacy: authenticity.

Dylan is authentic in his process and his appeal. Each shifting of shape and changing of direction has represented an opportunity for him to grow and develop as an artist.

On this EP, Peter is growing and developing as an artist, too.

“Won’t you come with me baby?
I’ll take you where you want to go
And if I don’t work out
You’ll be the first to know
I’m pledging my time to you
Hopin’ you’ll come through, too.”

This verse is from the same Bob Dylan song this EP takes its name from. Just who is Bob pledging his time to here? Who is this, “baby?” I have always thought that Bob was talking to his muse. It makes no difference to Bob if his changes in stylistic direction are met with cheers or challenge, he will always follow his muse.

On this EP, Peter is following his muse, too.

When I asked him why he was using "Pledging My Time" as the EP title, he said, “We, the musicians and I, were pledging our time to try and take these songs where no one had taken them before. We were pledging our time to make the best record we could make. You need a reason to make a record; you are driven by passion to make a record. It needs to be done with passion. No one has time for it if it isn’t.”

I can assure you - you will have plenty of time for this EP. “Passion” is on full display within this collection of songs.

If Peter is just now “ready” to make his statement, if he is just now getting started, I can’t wait to hear where his muse leads him next.

Bandcamp Daily  your guide to the world of Bandcamp